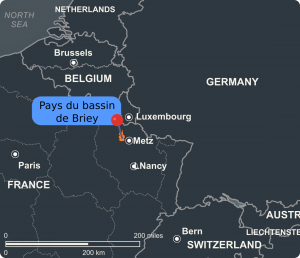 As described under the french law, a Pays is  an area whose inhabitants share common interests (geographical, economic, cultural, or  social interests). The Pays provides a framework for a territorial project, enshrined in a  territorial charter, based on the notion of joint interest and active involvement of all actors  (communes and inter-communes) that are free to be part or not of this project. The Pays should not be viewed simply as another layer added in the so called “mille feuille  territorial” but as a tool / instrument in favour of the territorial development.

It is composed by 5 communauté de communes and 68 communes that gather 78 336  inhabitants (INSEE 2011). The Pays brings together communes and “communauté de  commune” from all political levels (across political spectrum) to encourage shared vision of  the territory and foster joint projects.

The territory of Pays du bassin de Briey is situated in the North Est of France close to the border of Luxembourg in the département de Meurthe et Moselle. It is a mixed between peri-urban and rural area. It is strongly influenced by its relationship with Luxembourg and the “sillon lorrain”, demographically and economically. The nearest urban centre is Metz and Luxembourg. Historically the area has had a high dependence on its metallurgic industry. Indeed, from the 19th century through the 70s, mining and steel activities dominated the territory economy. As the result today, the area suffers from a high level of unemployement. It has also left its marks on the landscape and urban organisation. Since the early 2000s, the territory has seen a demographic renewal that came from its close urban centres (Luxembourg and Metz). Economic dynamism of those areas had brought jobs and brought new people on the territory that were looking for cheaper land and a rural lifestyle.

The Pays has undergone a rapid change as it has switched from a productive industrial space to a residential area. Such a drastic change, have had several consequences: -trend towards urban sprawl to meet growing housing needs -increase in private car trips -increase of services of any nature

Following the observation that most of the housing stock is quite old and far from the new eco standards, the Pays is implementing an eco renovation housing information plateform to help residents of the territory to undertake renovation and modernisation work. In addition to the informations, the Pays will subsidise a part of the renovation thanks to the “territoire à énergie positive” (TEP CV) grants that they received from the government.

The Local transport plan elaborated in 2011 has created an urban public transport authority that cover all the territory of Pays du bassin de Briey. Its objectives are to contribute to improving the mobility on the territory and limit the greenhouse gas. In practice, 100 per cent of the population must have access to an urban shuttle, inter-urban transport or on-demand transport. Also, the number of person using mode of transport other than individual vehicle must be doubled. The final aim is for the Pays to have an important role to play in the transport system in North of Lorraine.

The climate and Energy plan (Plan Climat Énergie Territorial, PCET) setted up since may 2012. The strategy of this plan is articulated around 3 objectives:

o Get involved in those initiatives for exemplarity matters, for instance, pooling of resources. It is the case between the Pays and the urban public transport authority.

A territorial unit named “Cellule Europe” has been implemented at a local level in order to maximize EU funds mobilization on the territory and thus to facilitate access to this funds for local authorities, associations and companies.